Bizarre Burial: Girl With A Bird Skull In Her Mouth

Between the 18th and 19th century in Poland, a child was given an unusual burial involving bird skulls within the Tunel Wielki Cave. A ritualistic burial like this surely would have been a spectacle, however, all information about the child and chaffinch skulls has been lost.

While rummaging amongst some dusty boxes filled with artifacts from old research projects at the University of Warsaw, Dr. Małgorzata Kot came across the aforementioned human remains. Stumbling across the skeleton was a surprise in itself, since the original researcher, Professor Waldemar Chmielewski had chosen not to publish the discovery.

The child’s skeleton was found over fifty years ago with a chaffinch skull inside its mouth, and another next to its cheek. The use of shallow graves within caves was a burial practice that dates back at least 4000 years. However, the radiocarbon dating of the bones reveals a hard life riddled in malnourishment and places the child’s death sometime between 1750 and 1850 AD.

Why was the burial hidden for so long? Who was this child and who buried them? Could these be the remains of a family ritual or something much more sinister? Currently researchers are attempting to answer these questions and more. 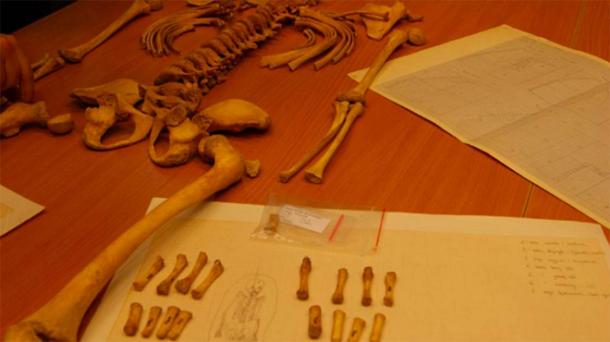 Researchers at the Institute of Archaeology at Warsaw have been conducting DNA analysis on the skeleton for years and recently revealed surprising information about the child buried with the bird skull in its mouth.

Genetic testing shows that these are the remains of a girl who was 10-12 years old when she died. The team’s research paper also reveals that she was not a Slav. According to the research team led by Dr. Michał Wojenka from the Institute of Archeology of the Jagiellonian University in Krakow, their analysis shows that the girl is likely of Fennoscandian or Baltic genetic ancestry.

They believe that the girl arrived in the area with Finnish troops who supported the Swedish King Carl Gustav’s invasion of Poland. From 1655–1657 there were Fin-no-Karelian troops situated at Ojców Castle near the cave and the researchers believe she was with them. As Dr. Wojenka notes, “We often imagine that only a regular army entered Poland during the Deluge, but we know from reports at the time that there were also quite a lot of women and children in the camps. This was also the case with the Swedish garrison at the castle in Ojców.”

The history of 17th and 18th century Poland is complex and filled with violence, famine, and power struggles. After the 1560s, the Polish-Lithuanian Commonwealth was created. In the late 1700s the commonwealth had three major players, including Prussia, Russia and Austria, effectively taking away Poland’s independence. Eventually Poland was erased from European maps, much like this child’s story.

The partitioning of Poland by different political powers necessitates examining the location of the Tunel Wielki Cave. This burial took place in Kraków-Częstochowa Upland, within the forested area of the Sąspowska Valley. This highland area contains beautiful rock formations and dozens of caves utilized in prehistoric times. These facts of ancient history were probably not in the forefront of the minds of the tortured citizens of mid-18th to early 19th century Krakow.

The early 1700s brought destruction and devastation in and around Krakow. The Swedish army seized and partially burned the historic Wawel Castle. These ruins were left to rot as Prussian and Russian invaders continued their destruction. In 1772 this area was controlled by the Austrian army, with orders coming from Napoleon himself until his eventual downfall. 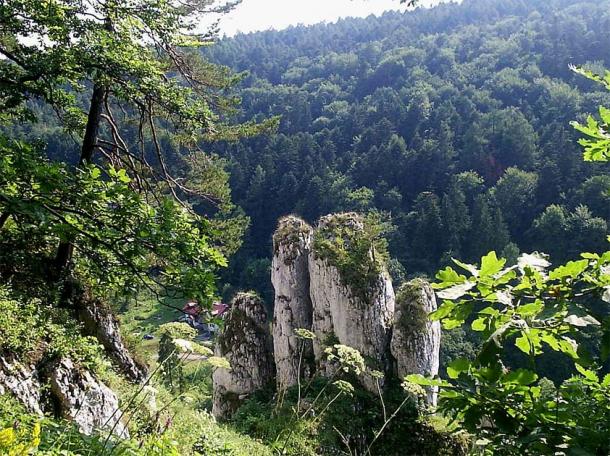 The Tunel Wielki Cave is located within Ojców National Park. There are over 400 caves within the area which is also known for its rock formations. (Jan Jerszyński / CC BY-SA 2.5 )

In the 1800s Poland attempted to steal its identity back. The region of Krakow became a symbol for spiritual and traditional Polish culture. Unfortunately, Poland remained abolished from the maps of Europe until 1918. Between the late 1700s and 1860 Poland saw military revolts, protests and attempted social reform. The political and social reform effort granting citizens of the Polish-Lithuanian commonwealth was thwarted by Russian and Prussian troops.

The girl discovered at Tunel Wielki Cave likely suffered greatly at some point between the 17th and 18th centuries. She may have borne witness to violence throughout her short lifetime and probably starved to death. Could the child have sought to fly away from it all, yearning to escape such hardships? If so, her loved ones would have remembered her fondness for freedom or chaffinches. This hypothesis could explain the symbolic use of the bird skulls, but remains pure speculation.

This tumultuous time saw many deaths and subsequent burials. It is estimated that most peasants and urban citizens were buried in cemeteries associated with their own religion. During the time in question, it was unheard of for anyone to be buried outside a cemetery, and preposterous that a modern human would be buried in a cave. 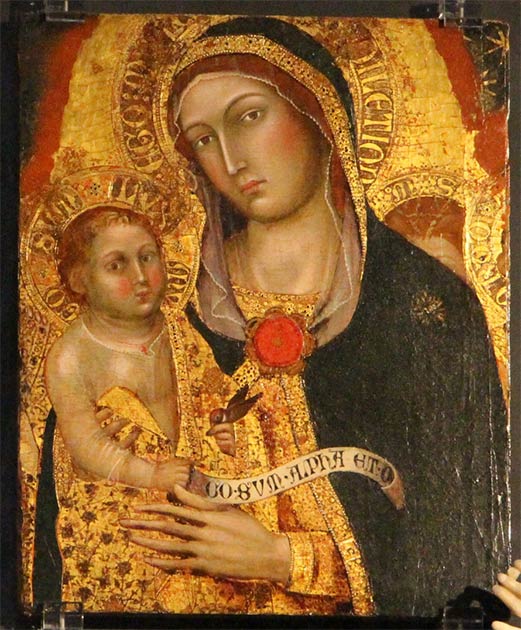 Madonna with child, with goldfinch in his hand, attributed to Taddeo di Bartolo. (Sailko / CC BY 3.0 )

Exploring Bird Imagery and Symbolism to Understand the Mysterious Burial

The commonwealth of Poland-Lithuania housed many immigrants prior to the 18th century. This country boasted tolerance, scientific discoveries and welcomed all. This led to the coexistence of many different religions, from the native Slavic paganism , to Judaism, Christianity, and Catholicism. Each of these religions use bird imagery in different ways. From chickens to ravens, birds appear to symbolize faith throughout history.

Slavic mythology contains clues to understanding this child’s burial. According to researchers, there is a particular myth related to a bird, likely a raven or crow. This bird could bring the water of life or death to a body, and the soul of the deceased would rise again in their previous body. There are many myths claiming that birds were the spirits of fallen humans or could bring a cycle of reincarnation. Could it be that the girl’s loved ones were hoping to bring her back to life? Or, were they attempting to set her spirit free?

Many cultures consider birds to be a symbol of freedom. In the Middle Ages many religious paintings included depictions of a chaffinch. The bird was present in imagery of saints or of Jesus Christ. This bird appeared in art when death was a subject of the painting.

This iconography symbolized the freedom of the soul upon death. Relatively recently, bird skulls have gained popularity and have been said to symbolize acceptance of fate and freedom in death. Could it be that this current trend was inspired by some deep subconscious associations?

The ancient ritual of cave burials were popular amongst prehistoric populations. There is evidence of Neanderthals burying their dead in caves approximately 50,000 years ago. Paleolithic and Neolithic tribes also utilized caves as cemeteries. In fact, the dozens of caves in the Sąspowska Valley were home to Neanderthal tools and Paleolithic human remains. Unfortunately, these sites were decimated by farmers, who used the soil from caves as fertilizer.

This kind of contamination of the site has led to questions about whether or not this burial site could in fact have been from an earlier time. However, the radiocarbon date has confirmed this child was in fact a modern human buried in a mysterious way. 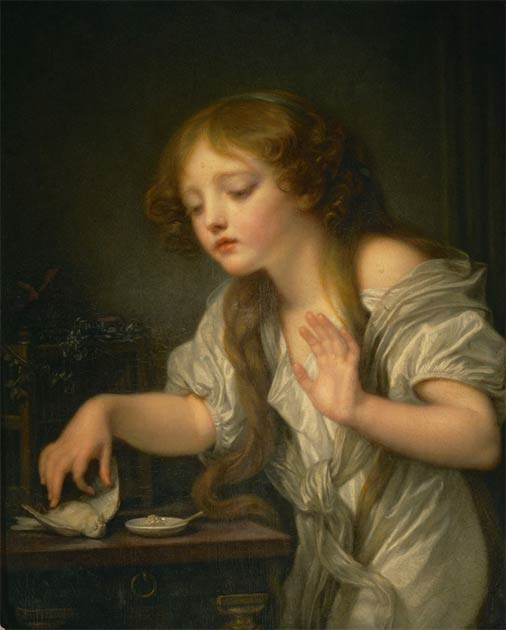 Girl weeping for her dead bird, a 1759 painting by Jean-Baptiste Greuze ( Public domain )

Will They Ever Solve the Mystery? Some Answers Arise But Others are Buried in Time

The bird skulls were originally examined by scientists who were unaware of their relation to a human burial. Recently scientists examined the small bird skulls again and found that both birds were adults and lack any sign of cuts. This likely rules out the possibility of the girl having eaten the skull of the Chaffinch or of the bird being alive when the skull was placed in her mouth. This points to ritualistic behavior, or at the very least someone deliberately placing these chaffinches and the child in the Tunel Wielki Cave.

But that’s not all! The researchers have also had to deal with a further hurdle in their quest for answers: the child’s skull is missing. Soon after the original researchers excavated this cave, they sent the skull to anthropologists in Wroclaw for further analysis. The current whereabouts of this skull remains a mystery to everyone involved, and only time might reveal the location.

And while researchers have gained some insight on the girl’s origins, they haven’t been able to get much closer to discovering the reason behind the bird skulls in her grave. They haven’t found similar funeral rituals in Scandinavia, but have pointed out that pagan practices, such as forest burials, were still present in some regions of Finland up until the 19th century.

Was this girl’s strange burial inspired by a loved one’s faith in mythology or a pagan belief system? Was it part of an unknown ritual? Could it be related to the Medieval portrayal of both chaffinches and finches? Or are these the remains of a sinister crime?

That part of the case remains as open as the plethora of interpretations. Perhaps someday the girl’s bones will speak more eloquently thanks to advances in science, allowing researchers to find the answers needed to unravel this particular enigma.

Starr, Michelle. December 3 2018. “Bones of a Child With Something Bizarre in Its Mouth Have Been Found in a Polish Cave.” ScienceAlert. Available at: https://www.sciencealert.com/the-bones-of-a-child-were-found-buried-in-a-cave-in-poland-with-the-skull-of-a-bird-in-its-mouth

Zdziebłowski, Syzmon. November 26 2018. “Małopolskie/ Bird Skull Found in the Mouth of a Child Buried in a Cave.” Science in Poland . Available at: https://scienceinpoland.pap.pl/en/news/news,31838,malopolskie-bird-skull-found-mouth-child-buried-cave.html