To date Celtic mythology remains one of the more enigmatic of the collective European folklore. Its deep-rooted legends, imaginative fables and magical myths deserve exploration to provide valuable insight into the beliefs of pre-Christian Gaelic peoples, such as the tale of Dagda, one of the most important deities of the native Irish mythology. Dagda’s tale offers ideal material to draw parallels between the old European civilizations that are lost in the mists of time. 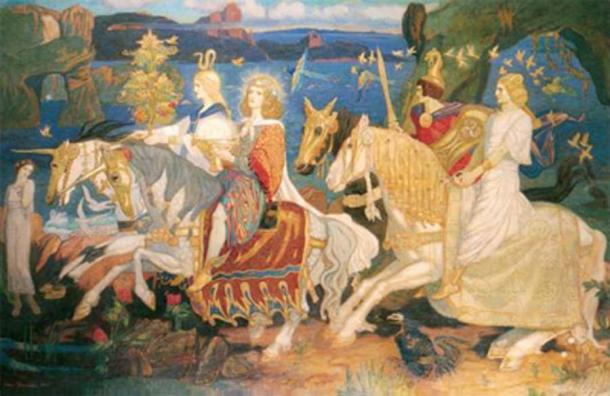 Dagda, or An Dagda , as he is known in Irish, was a high ranking individual in the hierarchy of the ancient Celtic pantheon. He was one of the chieftain gods of the Tuatha Dé Danann, or the ‘Tribe of the Goddess Danu’. Known as the Eochaid Ollathair (The Great Father), and Ruad Rofesa (the Mighty One of Great Knowledge), Dagda was associated as the good god. He had a binary role – he held the power over life and death. He was cast in the paternal role in ancient Irish mythology, a powerful leader who instilled security and inspiration – much like Woden of the Germanic myths, to whom Dagda is largely cognate. Dagda was also linked to fertility and abundance. He was said to have possessed two pigs – one always roasting, and the other always growing. He also owned two trees that were always in bloom and carried fruits. 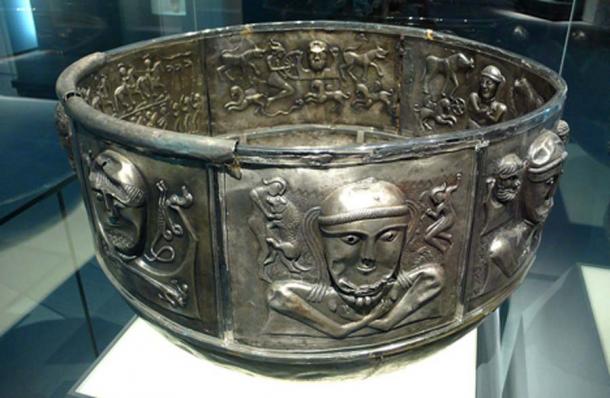 His main attributes were his great cauldron – the coire ansic, “un-dry” – which is similar to the cornucopia, as it can never become empty, being the source of inexhaustible amounts of food. He also wielded a great club, or a mace - called the lorg mór - a magical weapon that could kill with one end and resurrect with the other. His third attribute was his great harp, the Uaithne, which commanded the seasons and battles.

At the onset of Christianity, Dagda was largely demonized – presented as clumsy, monstrous, and fat, despite that his name and epithets all recognize him as the beneficent god. In fact, his name stems from a Proto Indo-European root - dago-deiwos - meaning the good god. His most common name, Dagdae Oll-Athair , is translated as the good-god-all-father, which earns him a share in the common Indo-European belief of chief patriarchal deities – the All-Father. Like Odin, Dagda had many different names by which he was known, albeit a bit more eloquent than the grim and warlike names of his Norse cognate. Some of the names of Dagda are crucial aspects of Irish mythology: He was called Riog Scotbe, “the King of Speech”; Fer Benn Bruaich , “the man of peaks and shores”; Labair Cerrce , “noisy striker”; and Brogaill Broumide, “the Large-lapped Farter”, and many more. In total he had about 26 names. 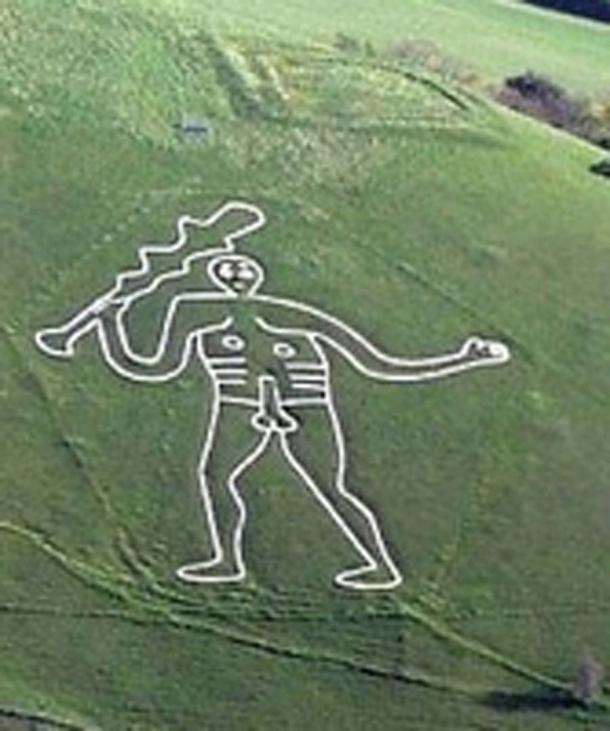 One of the more curios facts about this god is his appearance. He is described as tall, almost gigantic in stature, sporting a hearty beard. Unlike the mighty and fearsome gods of the Nordic or Slavic pantheons, Dagda is often described in a rather ungainly and comical way. Some of these descriptions originated from Christian referrals, but some derived from pre-Christian myths.  One of his characteristics refers to his big and round belly. The mythical Fomorians – his enemies -laughed and mocked his fat gut, but he still outwitted them. He is also described as scantily clad – wearing a short tunic that revealed his giant penis which dragged on the ground. This phallic description can be linked to Dagda’s role as the god of fertility. The huge chalk hill figure in Dorset – the Cerne Abbas Giant – which portrays a huge man with an erect penis and a giant club – can also be attributed to Dagda. 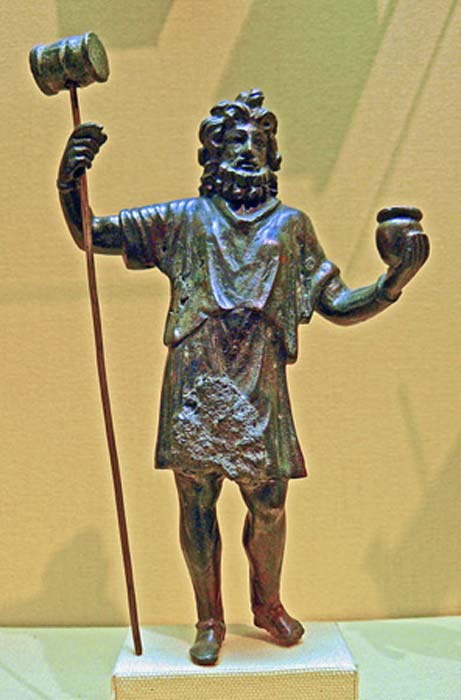 There exists a parallel between the Gallo-Roman deity known as Sucellos - originally a Celtic deity, which managed to survive into the Gallo-Roman period. Sucellos forms a link between the Celts of mainland Europe and those of Ireland. This deity’s name is translated to “the good striker”, from the Indo-European prefix su (good), and kel-do-s (striker). Sucellos was presented as a muscular and bearded man, bearing a tall hammer or a maul, and wielding a large dish. This is a clear parallel to Dagda. Sucellos was most prominent in the valleys of the Rhone and Saone, indicating a fusion of Roman and Celtic cultures. His cognate, Dagda, may manifest as his original appearance. 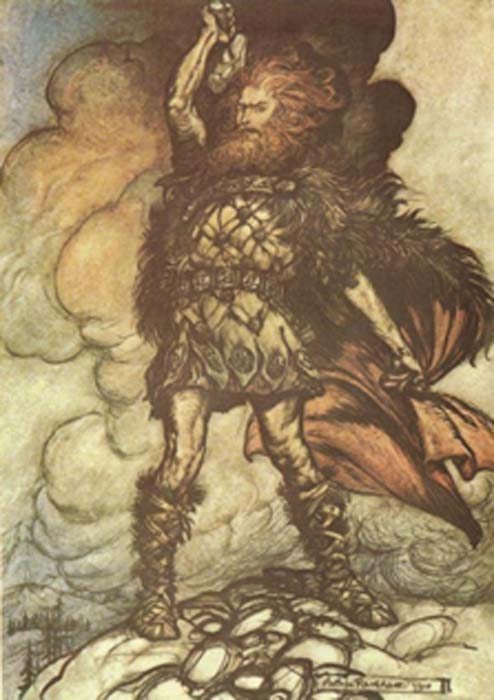 During the course of ancient Ireland to early Christian times, Dagda has been attested in many myths and tales, some of which form the basis of the Irish mythology as it is known today. Some myths are found in the Lebor Gabála Érenn – “The Book of the Taking of Ireland” – a narrative and a collection of poems, which at its earliest dates to a compiled version from the 11th century. In it, the Tuatha dé Danann are said to be the fifth settlers of Ireland, and Dagda was their chief. Independently Dagda is mainly regarded as an insular, Irish tribal god. As a deity, Dagda evolved in his idiosyncratic manner, as the Irish were mostly isolated from their continental Celtic cousins. As such, he became the protagonist of native myths and fables that are unique to Ireland, and he was carefully molded to suit the history of Ireland’s natives. That explains why Dagda is seen as a fatherly figure, a chieftain who led the deities (the Tuatha) against the mythical Fir Bolg, in the First Battle of Moytira ( Magh Thuiread – “plain of pillars”). 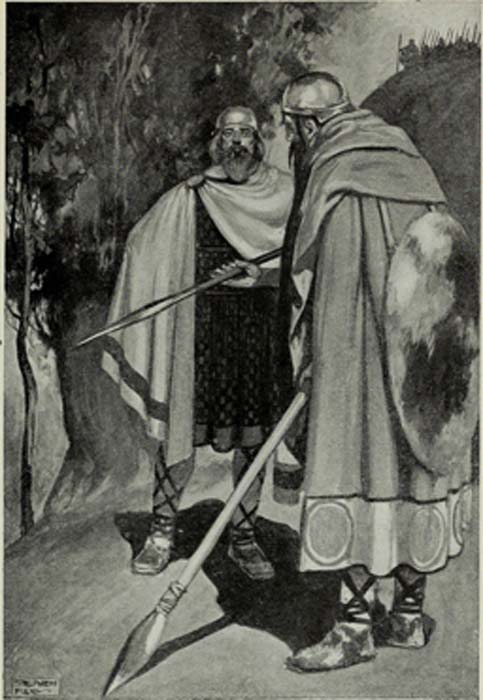 A Fir Bolg tale: The expulsion of King Bres, from a 1910 illustration.( Public Domain )

He was also the husband of the famous queen goddess the Morrígan, and his children were Aed, Brigit, Aengus Mac Oc, Cermait and Bodb Derg. His father is attested as one Elatha, son of Delbeath. Although married to Morrigan, Dagda’s mistress was Boann – the goddess of the modern river Boyne in Leinster. The legend tells that Dagda tricked her husband, Elcmar the Judge, by sending him away to the high king of the Fomori. He then impregnated Boann and kept the sun high in the sky for nine whole months, allowing her to give birth. That child was Aengus, the god of love and poetry.

This tale provides an insight, not just into Celtic beliefs, but also into the Indo-European belief system as a whole. The number nine repeats many times in many places, signifying great importance. For nine months the sun was kept high, Dagda’s mace could kill nine men with one blow, and Odin hung for nine days on the world tree. 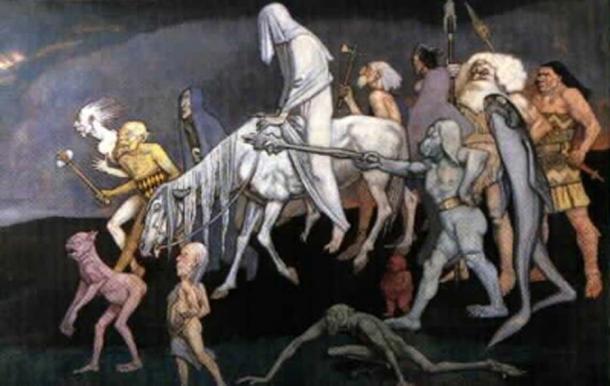 The war against the Fomorians was won with Dagda’s help, as the myths tell us. Before the great battle, Dagda managed to infiltrate and spy on the enemy. Afterwards, on his return he met with Morrigan, and saw her bathing in a river. According to myth there were nine tresses of hair falling about her shoulders. They mated and conceived the future goddess of healing – Brigid. Morrigan was charmed by her new lover, and revealed to him the prophecy, explaining the battle plan of the Fomorians, predicting victory for Tuatha dé Danann.

God of a Large Appetite

The power of Dagda is best attested in the legend of the Battle of Magh Thuiread. At the Samhain, Dagda went on a mission, and entered into the very heart of the Fomorian enemy camp.  In an attempt to ridicule him, they prepared a great measure of porridge for him, as Dagda was known as “a great eater of porridge”.  The meal was prepared in his great cauldron, and held 20 measures of fat, 20 of milk, and 20 of flour. Into this mix they added all manner of ingredients – goats and pigs, lard and sheep. They then poured the mixture into a large hole in the ground – a ritual that is still practiced at Samhain celebrations – and ordered Dagda to eat it, lest he be killed. 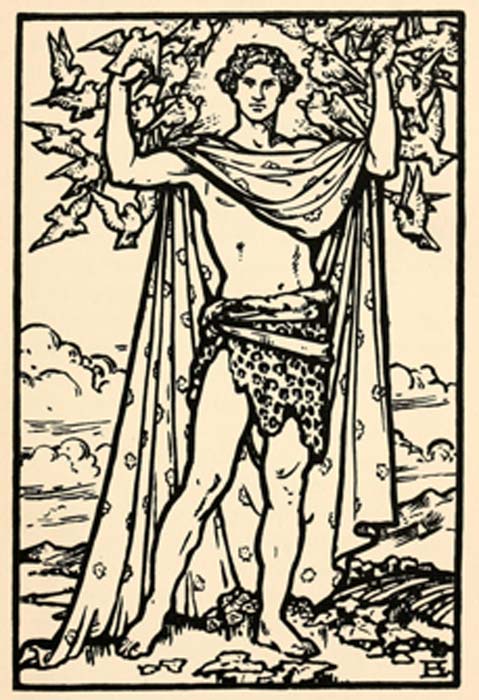 The myth explains how Dagda, denying his enemies the pleasure of ridicule, ate the entire meal, and even scraped the bottom of the pit. Afterwards, he had sexual relations with the daughter of the Fomorian leader, wooing her into serving him and turning against her father. The retelling of this myth was possibly made more sinful by the Christian critics, but the main elements of the cult of Dagda remain – cunning, lust, and voracity, which embodies his symbolism of fertility and abundance. In fact, food and sexual relations are two main elements of most myths related to Dagda.

All these myths, and their naughty details, serve as a clear insight into the pre-Christian cultures of Ireland, and the role of a chieftain god such as Dagda. At the same time a fierce warrior, a cunning trickster, a seducer, a provider and the holder of the cornucopia, he is certainly a multi-faceted deity. This larger-than-life role makes him the perfect leader, and a deity that people would gladly worship.
It is possible that all the male chieftain deities of Europe, such as the Germanic Woden, the Slavic Perun, Baltic Perkunas, Nordic Odin and Thor, Basque Orko, Celtic Taranis and Sucellus, and also Zeus, Jupiter and Mars, stem from one single deity. They all share the traits of great warriors and strikers, associated with thunder, and wield spears and maces. They all are multi-faceted tricksters, benefactors, protectors and punishers with a large appetite for life. Glimpsing into the remote corners of history, one can uncover connections that run deeper than ever imagined, connecting all humankind by exposing their shared roots. 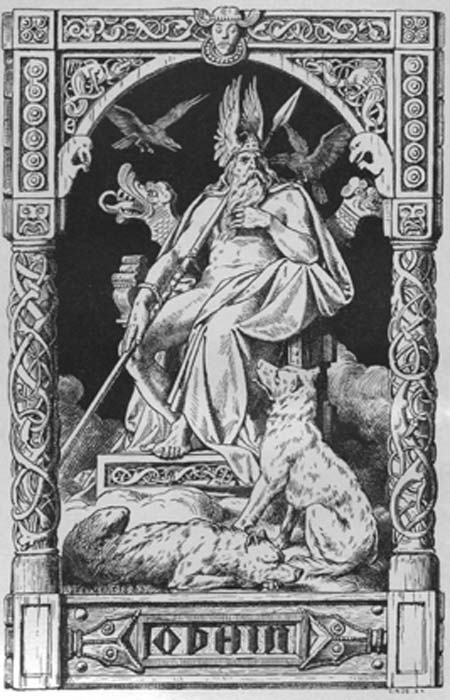 Odin on a throne, his spear in hands, flanked by the ravens Hugin and Munin and the wolves Geri and Freki , woodcut by Johannes Gehrts from Valhalla. Germanic deities and heroic legends. ( Public Domain )

The myth tells that Dagda was not an immortal deity. After ruling some 70 years as a chieftain, he was eventually slain by Cethleann, the wife of the cruel Fomorian Balor, in the second battle of Moytira. This occurred at the mythical place of Brú na Bóinne, which is today connected with the passage tombs of the Boyne valley. The myth of Dagda illustrates the rich ambience of Celtic myths and serves as a reminder that there was a well-developed culture in pre-Christian Ireland, which can assist in uncovering the complex connection between the modern peoples of Europe.