It is no secret that the enigmatic Hindu pantheon can be quite unique and overwhelming to fully grasp. It is full of mythical gods and goddesses, of wondrous divine creatures, and deep, meaningful, and quite philosophical concepts. It is also filled with exotic and complex names and terms, making it special and inspiring. The messages that Hinduism conveys are profound in many ways, and it is considered to be a tolerant and peaceful religion. It is also viewed as one of the world’s oldest religions, with roots dating back more than 4,000 years! Its gods are many and equally as old. And one of the principal deities of this magnificent pantheon is Lakshmi, a major Hindu goddess. Widely represented and venerated amongst all Hindus, Lakshmi is the major deity of love, joy, prosperity and wealth. And this is her history. 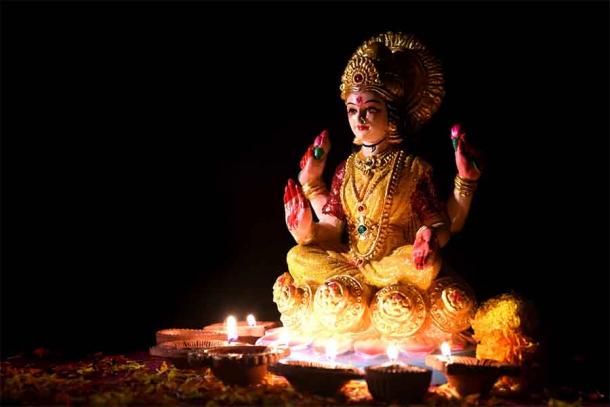 The name Lakshmi comes from the  Sanskrit name, Lakṣmī ( लक्ष्मी), meaning roughly “ the goddess who leads to one’s goal. ” Elsewhere she is also called Sri ( Śrī), meaning “Noble Goddess.” In  Hinduism, Lakshmi is one of the principal deities, widely venerated by all adherents of this faith. She is the goddess of prosperity, wealth, love, joy, women, beauty, and fortune. She is also a key member of the  Tridevi, a trinity of Hindu goddesses alongside Saraswati and Parvati.

In many ways, Lakshmi is venerated as a mother goddess of the entire Hindu pantheon and is also connected to the concept of  Maya or illusion. Lakshmi’s important position is further emphasized by her being the wife of the Hindu god Vishnu, one of the most important deities in Hinduism, and the Supreme Being in Vaishnavism. She is also Vishnu’s  Shakti (divine energy).

What is the meaning of the name  Lakshmi? In Sanskrit, this name is derived from the root word  laks, or laksa, meaning respectively “to observe, understand” and “goal, aim, objective.” The symbolism behind these combined words is clear and connected with Lakshmi’s role as a goddess.

Another term directly related and often used similarly is  laksana, which also provides direct insight into the symbolism behind this goddess: it signifies “luck, auspicious opportunities, aim, target.” Thus, we can understand that her name was ultimately meant to signify knowing one’s ultimate goal and objective in life.

A lot of importance has been given to the representation of Lakshmi through time. In many Hindu temples her effigies were carved out in superb and intricate detail, and often occupied prominent spots. She is almost always represented as a woman with broad hips and full breasts, smiling and seated on a lotus. Sometimes she is represented as standing as well, and almost always carrying a lotus flower or a lotus leaf in her hand.

It is important to remember that the  lotus has a special symbolism in Hindu belief. The lotus always signified knowledge and self-realization, consciousness, reality, karma, and liberation in the context of the Vedas. Furthermore, the symbolism of the lotus is purely natural: it is a beautiful flower that grows in both clean and dirty water, symbolizing purity, in spite of the conditions of life. 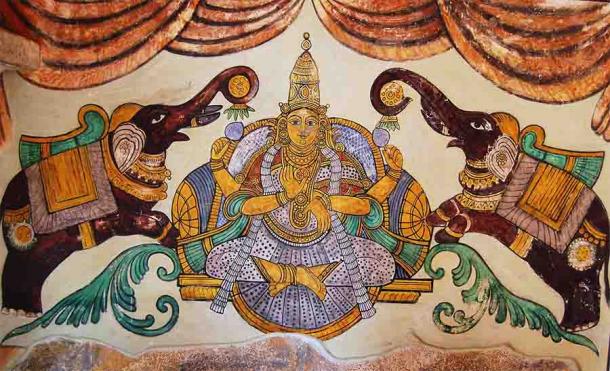 Lakshmi is also represented with four arms, as some other Hindu deities. In this case, each of her four arms represents a different concept in Hindu belief. One represents  kama, which signifies love and the pursuit of it, and also emotional fulfillment; another represents  dharma, i.e., the pursuit of an ethical and moral life; the third is  artha, or the pursuit of wealth and means of life; and the last one is  moksha, the pursuit of self-knowledge and liberation.

The next feature in representations of Lakshmi that you are sure to notice straight away are the two huge  elephants. They are often placed at her sides, below, or behind the seated goddess. These elephants are called  Gajalakshmi, and they too carry a lot of symbolism essential in Hinduism. They represent hard work, strength, prosperity, fertility, and positive activity. They are shown often as showering the goddess from their trunks.

In Hinduism, gods are usually shown with their “vehicles,” known as  Vahana. These are special spiritual beings that carry the deities, and in case of Lakshmi, this is an  owl. Owls signify the devoted striving for observation and the discovery of knowledge, and the ability to see clearly even in darkness (as an owl is a nocturnal predator).

When one looks at an effigy of the goddess Lakshmi, one small detail in her posture quickly catches the eye: her outstretched hands. Both her face and her open hands are in a state of mudra, and represent a notion of giving, compassion, and overall charity. This is related with her role as a goddess of wealth and fertility. Some representations present her as holding a jar of money, depicting her thus as a giver of wealth. However, this wealth should not be considered as simply material. It is, more importantly, spiritual as well. The prosperity that Lakshmi offers is much deeper: it is the prosperity of self-recognition, of growth and cognizance.

In all ancient cultures of the world, the reverence and worship of the personified Mother Nature and the bounty she brings was always widespread and a central aspect of all  polytheistic cultures . The same goes in India, with Lakshmi taking up this role. But it is important to understand that it was not just the Hindus that adopted the deep reverence for this goddess.

In India, the followers of  Jainism and Buddhism also adopted Lakshmi. Both Jainism and Buddhism are basically monastic orders, both very old and popular, that branched off from the main Vedic rituals of Hinduism and the Brahmin dogmas as early as 2,500 years ago. This makes them both ancient, but it also shows that Lakshmi was very important even back then. In both of these religions, one can spot a variety of symbols, which represent prosperity and wealth and that are associated with Lakshmi.

In Buddhism, there are ancient tales of worshippers requesting the aid of Lakshmi, so she could drive away the malignant goddess of misfortune, Kalakanni.

And in the sacred Jain texts, it is said that when a fated and powerful soul is about to be born into this world, its mother has auspicious dreams, including the images of the goddess Shri (Lakshmi). The epithet Shri is one reserved for the holiest deities and it signifies authority and holy grace. 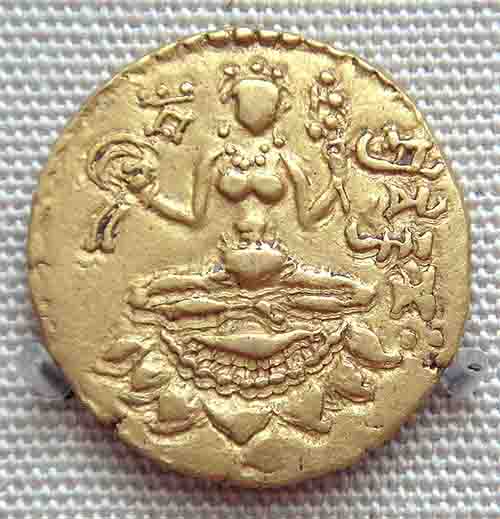 Lakshmi: How She Changed Over Time In India

Did you know that some of the most important stories of Lakshmi first appeared relatively late in the history of Hinduism? In the  Mahābhārata and Ramayana epics, composed between 300 BC and 300 AD, Lakshmi appears with great importance.

This was a crucial time in Hinduism, when the gods of the Vedas were becoming less popular, and deities like Vishnu and Shiva became more prominent. In such stories, Lakshmi is fought over by both the gods and the negative demons, who struggle to  churn her out of an ocean of milk.  In the appendix of the  Mahabharata, called the  Harivamsa, the major god of love, fertility, and lust,  Manmatha, is said to be the son of Lakshmi.

From this point on, the story and the mythology accompanying Lakshmi began developing steadily and was undeniably accelerated with the increased development of writing systems. From roughly 500 AD to 1500 AD, the “ Chronicles of the Gods ” or  Puranas were written, and Lakshmi is prominent in them. She is presented as one facet of a major trinity of goddesses, forming the supreme form of the mother-goddess. The other two aspects are Saraswati and Durga. In some of these writings, Lakshmi has a dualistic role, as both the submissive wife of Vishnu, but also as a powerful and independent goddess. Likewise, her depictions differ. In some she is by Vishnu’s feet; elsewhere she is alone and seated on a lotus.

In some parts of India, Lakshmi gained an even bigger role as an all-encompassing entity. How can we know this? Well, in these regions the Prithvi, a major Vedic earth goddess, becomes a mere manifestation of Lakshmi. In southern parts of India, these two goddesses are presented as separate deities, both standing at the sides of Vishnu. In these cases, it is Prithvi that signifies tangible wealth, while Lakshmi represents intangible wealth.

It is around the 300 BC that the first elaborate images of Lakshmi began appearing, which are today found mostly in the region of Kaushambi, in Northern India. Her image is also shown on coins that were minted during the fourth century AD during the Gupta Empire. As the worship of Lakshmi became very important in the Gupta royal court, so did it spread around the country, as people believed that she bestowed great wealth and sovereignty. Separate shrines dedicated only to Lakshmi began appearing around the 7th century AD and were widespread around India by the 10th century. 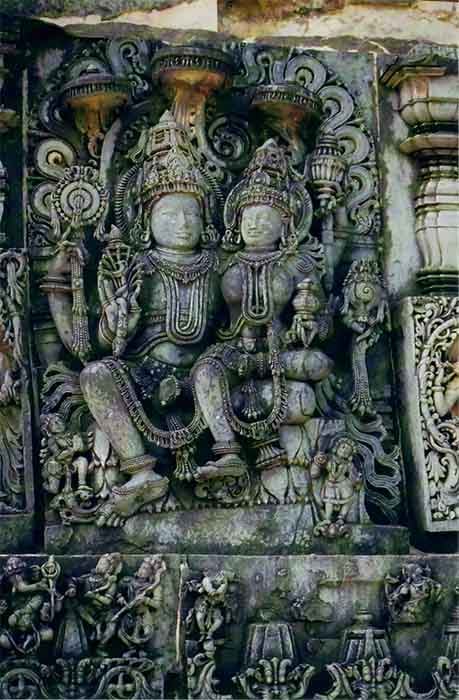 Relief sculpture of the Hindu god Narayana with his consort Lakshmi in the Hoysaleswara Temple, Karnataka, India. (Dineshkannambadi /  CC BY-SA 3.0 )

But what about today? You should not be surprised to learn that Lakshmi is still widely venerated all around the Hindu world, especially in India. Many Hindus worship the goddess on the day of  Diwali, India’s colorful Festival of Lights. This holiday is celebrated usually in October or November.

Why “The Festival of Lights”? Because through it is represented the symbolic victory of light over darkness, and also knowledge over ignorance, hope over despair, and, ultimately, good over evil . It is one of the major Hindu holidays, and most worshipers make efforts to dress in their finest clothes, tidy up their homes, and set up special  diya lamps and candles all around their living space. On the night of Diwali, families engage in personal prayers to Lakshmi. What ensues next is the true celebration of life: family feasts, exchanging of gifts, and all-out positivity. And in the end, that is all that the goddess Lakshmi is about!

The importance of Lakshmi in modern day India cannot be denied. There are hundreds of hymnals, chants, and recitals dedicated to this powerful goddess, and through them, the Hindu adherents are keeping alive a tradition and a deity that existed for centuries upon centuries.

Mother goddesses were always an integral part of ancient civilizations. From east to west, there is no exception to this rule. And in most of these cases, these goddesses were in fact Mother Nature personified.

People depended on the fertility of the land and the abundance of crops. And we all know that nature can be fickle. When the yield is unsatisfactory, all is placed at risk. And having an all-powerful, mighty goddess to offer sacrifice to and worship was very important for these peoples. After all, who can grant success and wealth, if not Mother Nature?

Balfour, E. 1885.  The Cyclopædia of India and of Eastern and Southern Asia, Commercial Industrial, and Scientific.  Bernard Quaritch.