One would think that a church is a place of refuge, of spiritual comfort and protection - where violence has no place to exist. Usually, this is exactly the case and throughout the world churches are great monuments of cultural and architectural achievement. But sadly, they were often victims of war. No matter how pretty, old, or peaceful, churches were often destroyed and razed to the ground, even when they harbored refugees.

However, in  Transylvania - the most popular region of modern day  Romania - the inhabitants came to a novel idea. Kill two birds with one stone by protecting the churches and the citizens with fortified churches. This gave rise to a unique tradition that spread across the Transylvanian region. Throughout the Middle Ages and onwards, over 300 Transylvanian fortified churches were erected. Nowadays, around 150 survive, with a couple of remarkable examples that look like true medieval castles. 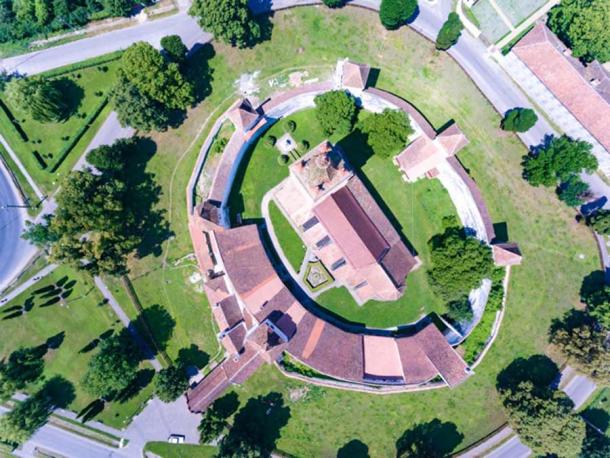 What are the Origins of the Transylvanian Fortified Churches?

It is important to know that fortified churches as such are not unique to the Transylvanian region. Examples of this architectural practice can be observed across the world. Usually, fortifications were erected in regions that were often embroiled in wars, especially religious ones.

As the construction of an elaborate stone church was a costly and time consuming endeavor, the citizens and city officials had an interest in protecting it. By raising thick defensive walls and towers, they could retain their place of spiritual refuge, and save their efforts too. The practice was especially prevalent in regions where two opposing religions clashed.

What is more, fortifying religious places was a common practice in medieval times. Holy monasteries were often surrounded by actual castle-like  fortifications, with enormous battlements and all the features that come with them. Monasteries were a source of income and a sign of prestige and influence, and had to be protected from marauding enemies.

Notable examples include the Ávila Cathedral in Old Castille, Spain; the medieval Manasija Monastery in Serbia; the Solovki Monastery in northern Russia; the St. Arbogast church in Switzerland, and elsewhere. In fact, some churches were so elaborately protected, that in the German-speaking parts of Europe, they were called  Kirchenburgen - the “church castles”.

But the practice was most common in regions where warfare was a constant threat - usually in border regions. For example, the French area of  Dordogne was historically the site of much warfare between the French and the English. That’s why fortified churches are common there.

Transylvanian fortified churches are no exception, erected as they were at a border region where the threat of  Ottoman incursions was constant. Fortifying the churches was better than living in constant fear of pillaging and destruction. 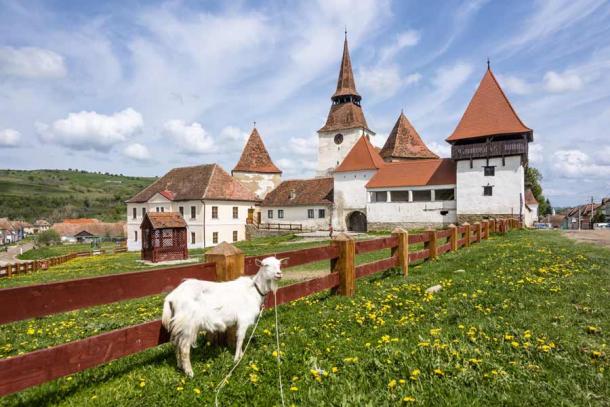 Even though  Transylvania is today a part of  Romania, historically it belonged to various medieval rulers. Notably, it was part of the Kingdom of Hungary, a medieval realm that existed roughly from 1000 AD right up until 1918. Transylvania had a different name as well. Historically, it was always known (and that name is still used today) as  Siebenbürgen, a German term meaning “Seven Castles”. The name reflected the seven key cities (villages) that belonged to ethnic Saxons: Germans that were settled into the region in the 12th century AD, on the orders of the Kings of Hungary.

These Saxon colonists had a privileged status within the Hungarian Kingdom, and were a tightly knit community of traders, artisans, farmers, and soldiers. In time, they became known as Transylvanian Saxons, a German ethnicity within Romania, successfully preserving their German culture across the centuries. And the unique Transylvanian fortified churches are most commonly associated with these people - as just one part of the rich heritage they brought with them into the region.

The seven original cities ( Siebenbürgen) of the Transylvanian Saxons were most likely  Kronstadt (Brașov), Hermannstadt (Sibiu), Klausenburg (Cluj-Napoca), Mediasch (Mediaș), Mühlbach (Sebeș), Schässburg (Sighișoara), and  Nösen/Bistritz (Bistrița). However, the Saxons inhabited many more villages, and almost all of them had their own fortified church. This is because the people were always under threat of Ottoman and Tatar invasions. The threat was especially apparent after the 1389  Battle of Kosovo , in which the Serbian army unsuccessfully attempted to stop Ottoman invasions into central Europe. 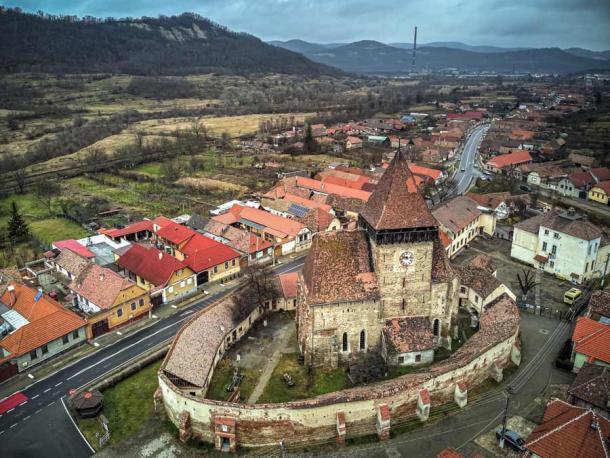 The Iconic Feature of the  Siebenbürgen

So, the Transylvanian Saxons decided to fortify their churches. Located at the center of villages, fortifying them was much easier than fortifying the entire village. By including defensive towers, battlements, and storehouses, villagers were able to withstand long sieges if need be.

Some of these church-forts were more complex than others, but the layouts were usually quite similar. The centerpiece was - of course - the church, which was always at the center of the town or village. Then came everything else. Some had a small  enceinte (enclosing walls) around the church itself, some had a host of fortifications, while the largest and most complex ones resembled true castles - complete with battlements, watchtowers, gateways, and other key elements.

Of course, throughout history, churches were almost exclusively built in strategic places - usually the hilltops. And when the Saxons added the military features, these churches transformed into true, easily defended castles. Over time, these Transylvanian fortified churches were extended: additions were made, new features included, and the complexes expanded. This was usually done according to the latest technologies and methods of the time.

Also, the key buildings of the village were quite close to the church itself, if not within the defensive walls. These included the grain storehouses, the city hall, the school, and anything else that was of vital importance.

As the Transylvanian Saxons expanded in the region, so did the number of villages they lived in. Over time, around 300 fortified churches of various types existed, most of them constructed by the Saxons. Nowadays, around 150 survive, with the most important examples being listed as UNESCO World Heritage Sites .

These are the so-called “Villages with Fortified Churches in Transylvania”, and there are seven of them. Six of these churches belong to the Transylvanian Saxons, and another one belongs to the Székelys, a Hungarian minority living in Transylvania that also adopted the custom of fortifying churches. They are well preserved and are crucial for the story of Transylvania fortified churches. 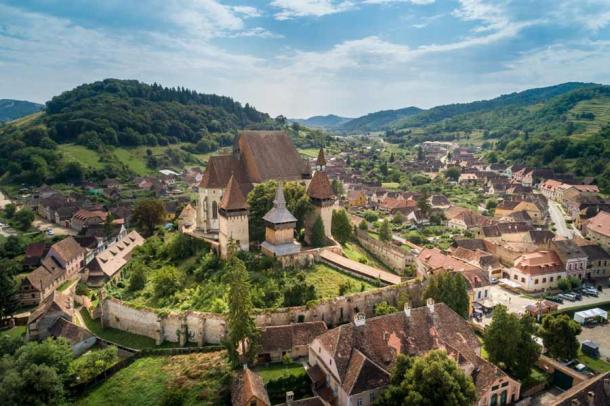 One of the foremost examples is found in the village of Biertan, known originally in German as  Birthälm. This is a Lutheran fortified church, erected by the Saxons during the time of the Kingdom of  Hungary, around 1224 AD. Originally - and for a short while - it was a Catholic church, but became Lutheran after the Reformation era.

Both the village and the church are  UNESCO sites , and provide a glimpse into the practice of church fortification. Biertan village was founded by the Saxons that arrived in the Middle Ages. Early on it was given certain rights and privileges, becoming a market town of importance early on. Together with the church, the village became the see of the Saxon Lutheran Church. It remained so from 1572 to 1867. Of course, this meant that the church itself is quite elaborately built, in the Late Gothic Style.

The Biertan church is situated on top of a prominent hill, which gives it a commanding overview over the landscape, as well as its distinct castle-like appearance. With the increased threat of  Ottoman incursions into the area, the town was given the right to bear arms in defense. Thus the Biertan church boasts nine imposing towers, three rows of exterior fortifications, a four-story high clock tower with parapets and battlements. To that end, Biertan fortified church is one of the iconic representatives of this unique tradition. It is almost entirely swallowed by tall square towers that rise powerfully on top of the hill, giving a sense of security and impregnability.

Another of the seven key churches is the Dârjiu fortified church, situated within the town of Dârjiu , known in Hungarian as  Székelyderzs. As the name suggests, this fortified church was not built by the Saxons, but by the  Székely Hungarian minority. As such, this is a Unitarian church, which also was Catholic before the Reformation.

Just like Biertan, Dârjiu church is one of the magnificent remnants of Transylvania’s storied past. The picturesque church is surrounded by 5-meter tall (16 ft) white fortified walls, which were erected as early as 1400 AD. The walls are guarded by formidable bastions that jut out from the four corners of the walls. The church itself is noted for its well-preserved and fantastic frescoes, and its striking white walls. Today, it is one of the fundamental Transylvanian fortified churches, and an important part of the Székely identity. 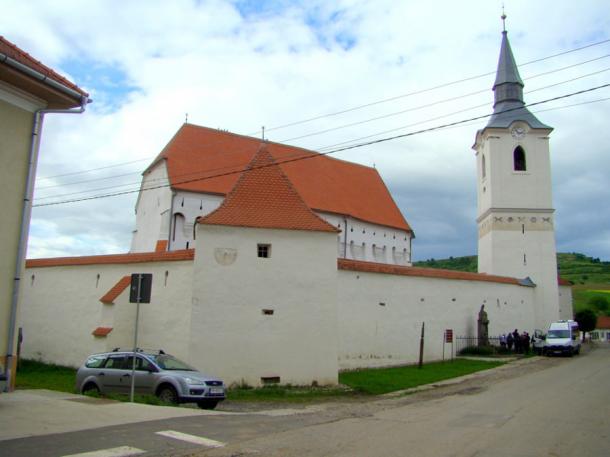 From Teutonic Knights to Transylvanian Saxons

Another unique  Transylvanian fortified church  is found in the town of Prejmer, known historically as  Tartlau. Interestingly, this church was not erected by Saxons or the Székelys, but by the Germanic  Teutonic Knights ! This is just another fact that points to the diverse ethnic background of Transylvania.

Prejmer Church was erected around 1218 AD, in the classic Gothic style. This was done by the  Teutonic Knights  that were allowed to settle here in 1211 AD. However, the knights were expelled by 1224, and the church was taken over by the Cistercian monks in 1240. Eventually, it passed into the hands of the Transylvanian Saxons.

Sadly, this fortress church was in the direct path of the invading Ottomans. To that end, the village of Prejmer was razed to the ground over 50 times between the 13th and 17th centuries! But the church-fort was harmed only a couple of times, which is a testimony to the effectiveness and the defensive properties of these unique creations. Prejmer Church is characterized by its high defensive walls that enclose the church and tower well above it.

However, not all fortified churches of the Transylvanian Saxons had the privilege to survive over time. A notable example is the Saschiz church, which was popularly known as the Saschiz Peasant Citadel. The Lutheran church, built around 1396 AD, has survived to this day - but the indomitable fortified walls that surrounded it are now completely in ruins. The only aspect which has survived is the very tall square defensive tower, standing adjacent to the church. There was also the “peasant citadel” nearby, a formidable fortress on top of a hill, but it was devastated in the Middle Ages, and lies in ruins.

UNESCO’s list of Transylvania’s heritage churches includes others, such as the Câlnic Citadel church, the Valea Viilor (Wurmloch) church, and the marvelous Viscri fortified church. This last one is known in German as  Weisskirch (which translates as “white church”), and is one of the churches with the oldest roots. Initially the site of a chapel erected by  Székely Hungarians, it was quickly adopted by the Saxons upon their arrival around 1141 AD who soon erected a formidable church, which was later fortified to a great extent.

Surrounding the church, the fortification walls are up to 7 meters tall (23 feet), and have an oval shape. Two tall battle towers guard the northern end, with the church’s belltower acting as a third one. The fourth tower stands over the gates, flanked by fortified outbuildings. This whole complex is thus the ideal representation of Transylvanian fortified church tradition, and captures the imagination with its striking white walls. 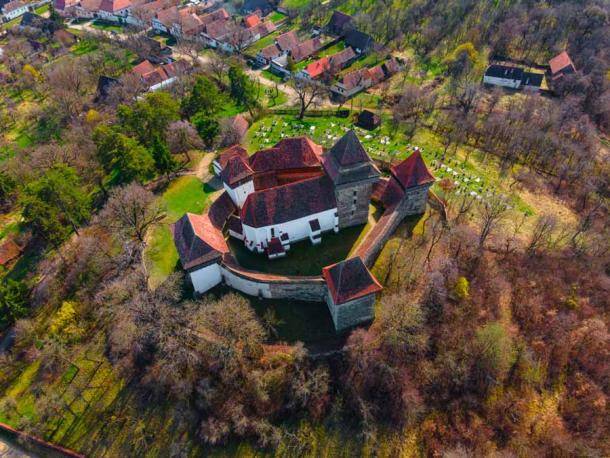 Romania: A Land with a Diverse Heritage

On the whole, these historic buildings are a major heritage of the distinct Transylvanian Saxons. This ethnicity prevailed over the centuries, preserving its unique German dialect and customs. They are just one part of the wider colorful palette of ethnic subgroups that are today present in  Romania.

Other ethnic German groups in the region are Bessarabia Germans, Banat Swabians, Dobruja Germans, Bukovina Germans, Satu Mare Swabians, and Zipsers. However, official census recordings indicate that today there are just 36,000 ethnic Germans remaining in Romania, with roughly 11,400 being of Saxon descent. But even if the people leave and dwindle in numbers, their architectural and historic heritage remains dotting the Transylvanian landscape.