Walking the Waves: How Orion’s Ability to “Walk on Water” Was Ascribed to Jesus

Jesus’ supernatural stroll across the Sea of Galilee endures as one of the most popular Christian miracles. The outset of each version is identical: Jesus directs his apostles to row to the other side of this inland freshwater sea, while he departs to a nearby mountain to pray. Later that evening Christ notices the apostles’ ship far from shore and foundering in a roiling sea stirred by fierce headwinds. He then steps down from the mountain and strides across the surface of the sea for three or four miles until reaching the apostles’ boat, presumably to keep it from sinking.

Discrepancies to the Tale of Jesus Walking on Water

At this juncture the stories become utterly irreconcilable. Matthew 14:29-31 reports that the disciple Peter climbed out of the boat and, for a short time, walked upon the waves towards Jesus before his wavering faith caused him to sink beneath the surface—a paranormal act in its own right yet one omitted by Mark and John. 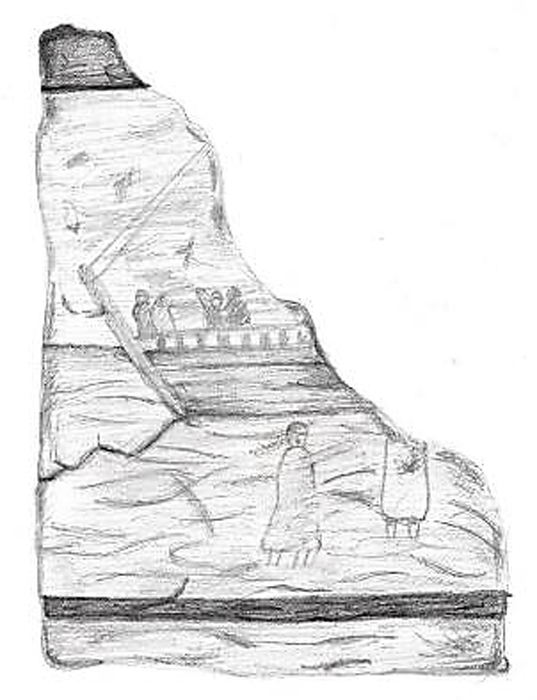 Peter (right) walking upon the sea towards Jesus as reported in Matthew’s Gospel. (sketch of baptistery painting from Dura-Europos, Syria, circa 240 AD, by Ashley McCurdy)

Equally perplexing are the words of Mark 6:48, which recount that Jesus “wanted to pass by” ( ēthelen parelthein ) the apostles’ ship during his sea-walk, as if unconcerned by their life-threatening circumstances! Finally, John 6:21 incorporates a second miracle into the story, stating that the disciples’ ship instantaneously teleported several miles to the other side of the lake the moment they tried to bring Jesus aboard!

The glaring discrepancies indicate that the Sea-Walk miracle was not the product of eyewitness testimony. So how did the evangelists come to accept a common Sea-Walk miracle as an historical fact, yet incorporate details so jarring they leave the vignettes incompatible?

A Story Written in the Stars

The answer appears to have been “written” in the stars, in the form of two esoteric systems of truth verification circulating throughout Syria-Palestine in the 1st century AD. Christian theologians unanimously concede that the Gospel authors were anonymous Hellenistic Jews who had never met Jesus and had no eyewitness testimony to draw upon. Yet each shared the belief that Jesus was the deified, “Son of God” ( huios theou ), and “Anointed One” ( Christos) whom had ascended into ouranos, “heaven,”—a word that simultaneously meant “sky, firmament” and referred to the realm where one finds the constellations. Moreover, as educated Jews fluent in Greek and living in a land that had been colonized by Greek-speaking peoples, the evangelists had surely been exposed to the Hellenic religious tenet called katasterismos, or “placing among the stars”, which proclaimed the forty-eight ancient constellations as a sacred record of monumental events that had once occurred on earth—each star-figure engaging in one or more of the preternatural feats that made it, like Jesus, immortal.

Seven centuries before Jesus strode across the Galilean Sea, the Hellenic astronomer-poet Hesiod, in a work entitled Astronomy, reports that Orion was able to walk on water:

“Orion … the son of Euryale, the daughter of Minos, and of Poseidon, and that there was given him as a gift the power of walking upon the waves [of the sea] as though upon land”. 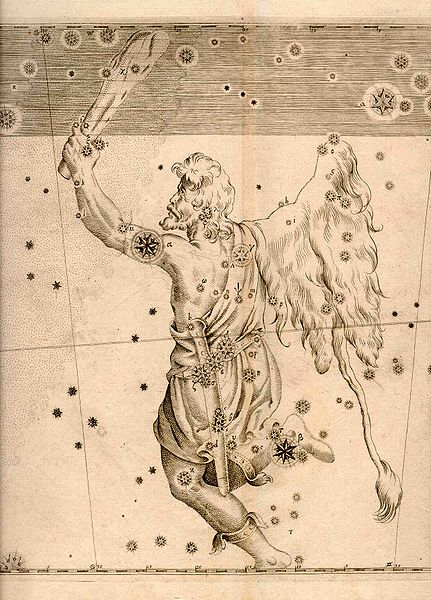 A print of the copperplate engraving for Johann Bayer's Uranometria (1661) showing the constellation Orion. ( Public Domain )

Orion’s preternatural ability to “sea walk” was reiterated in The Library of the Greek mythographer Apollodorus (50 BC), the Latin Aeneid of Virgil (20 BC), and the celestial mythology of the Roman astronomer-poet Gaius Julius Hyginus (15 AD).

Since Orion’s ability to “sea walk” was reported by two astronomer-poets (Hesiod and Hyginus), it’s unsurprising to find that this concept was embedded within a stellar tableau. When plotted on a star-map, Orion’s outstretched legs portray him striding away from celestial land and onto the astral “Sea” delineated by the eight, contiguous aquatic constellations consisting of the Dolphin, Goatfish, Southern Fish, Water-pourer, Sea Serpent, River, Twin-Fishes, and Ship.

The notion of “sea walking” was accentuated by the position of this constellation-god’s front foot, demarcated by the star Rigel (β Orionis), which appears to be stepping onto the first star in Eridanus (λ Eridani), the River constellation. Also noteworthy is that Mesopotamian astronomical lore identifies Gemini as Mount Mashu, the “Twin-Mountain”, and Aquarius as the Water-god, Ea, a constellation-deity whom inhabited the stellar Sea and is best-known for sending the Great Flood popularized in the Biblical Noah legend .

Orion appears to be stepping onto the stellar Sea delineated by the eight, contiguous aquatic constellations. (sketch: Ashley McCurdy)

Thus, ancient astronomical accounts lead to the same conclusion: whenever Orion appears in the heavens he is actively engaged in “walking upon the sea”. Because Hellenic mythology was taught in the Greek schools of Syria-Palestine in the 1st century AD, it’s highly plausible that the evangelists had become familiar with Orion’s stellar sea-walking ability before writing their Gospels.

Yet the Gospel authors were privy to another esoteric form of proof authentication circulating in scholarly enclaves of their day. Originating from Mesopotamia came the astrological belief that the constellations depicted shitir shamee , “heavenly writing”—a cryptic text that divulged unassailable wisdom through the medium of wordplay encrypted in the star-gods’ images and titles. Once gleaned, such pun-based wisdom was reported as unassailable truth. This accords perfectly with the title of the Babylonian astrologer: tupsharru, “writer, scribe”—a linguistic expert who read the sacred “writing” of the star-gods to discern enlightenment, revelation, or signs of future earthly events that could be avoided or exploited. 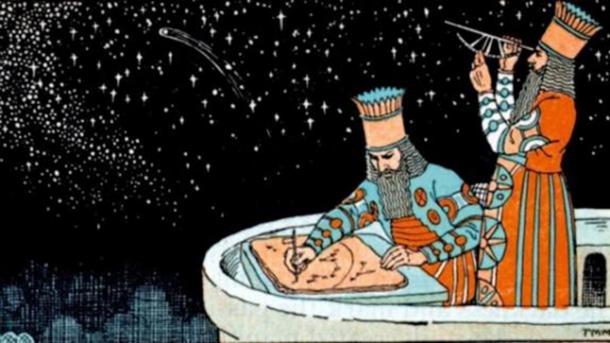 Babylonian Astrologers mapping the stars. Babylonian astrology was seen as very important in the running of the state. ( Cradle of Civilization)

Evinced by their title, Babylonian astrologers were adroit grammarians proficient at reading and writing in the highly complex cuneiform writing system; a task that included mastery of their spoken tongue, Akkadian, as well as proficiency in the reading and writing of Sumerian, which was the “dead” language of the southern Mesopotamian people from whom the Akkadian-speaking Babylonians adopted the cuneiform script . A type of reference manual deemed invaluable to Babylonian astrologers was the circa 1800-1600 BC Sumerian-Akkadian dictionaries. The Sumerian-Akkadian dictionaries catalogued thousands of Sumerian logograms; a Sumerian logogram consisting of a cuneiform sign or sign-grouping that was read as a Sumerian word and used to represent an Akkadian (i.e., Babylonian) word with the equivalent meaning (reader’s note: Akkadian is transliterated in italics, Sumerian in capitals).

The Sumerian logogram lists catalogued in the Sumerian-Akkadian dictionaries illustrate that the cuneiform writing system was predisposed to an astounding level of polysemy, or “multiple meanings in a word or phrase”. This phenomenon can be illustrated by the cuneiform sign AN, the Sumerian word for “skies, heavens”, which served as the logogram for the Akkadian (i.e., Babylonian) word shamuu, “skies, heavens”.

The Sumerian logogram AN with some of the Akkadian words it represented. (Author provided)

Yet the Sumerian-Akkadian dictionaries indicate that the logogram AN also represented many other Akkadian words, including: ia’u/“mine”, shubultu/“barley-ear”, zuqqupu/“impale”, sha/“of”, and asakku/“taboo”. And if that’s not confusing enough, AN was also read DINGIR, or “god” in Sumerian; which served as the logogram for the Akkadian ilu, “god, deity”. Hence, when a Mesopotamian astrologer wrote the cuneiform sign AN he knew it could potentially convey the Akkadian meanings “heavens, mine, ear-of-barley, impale, of, taboo, and “god”. Amazingly, the listed puns are just a smidgeon of the total number of Akkadian words represented by the Sumerian logogram AN.

In sum, polysemy enciphered in the Sumerian logograms could interject vast numbers of veiled wordplays. When discovered by the astrologer, these puns were construed as divine revelation that imparted incontestable truth.

Orion: the “Son-of-God” and the “Christ”

The Gospels’ lack of historicity is summarized by the Oxford Annotated Bible :

“Neither the evangelists nor their first readers engaged in historical analysis… Scholars generally agree that the Gospels were written forty to sixty years after the death of Jesus.  They thus do not present eyewitness or contemporary accounts of Jesus’ life and teachings .”

However, as shown above, what the Gospel authors did embrace were three arcane convictions that—when used as a cipher—allow us to ascertain how Orion’s astronomical “sea-walking” ability was attributed to Jesus. The first is the Hellenic belief that the constellations portrayed an incontrovertible pictographic record of sacred history. The second was the belief Jesus had ascended into ouranos, the “sky, heaven”, which is precisely where one finds these hallowed, stellar still-frames. And the third was the Mesopotamian belief that polysemous meanings embedded in the constellation-gods’ cuneiform title imparted immaculate knowledge. 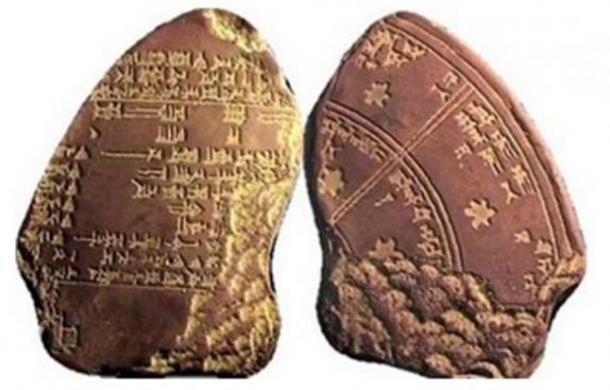 We can suspect that the evangelists were cognizant of Mesopotamian astrological esoterica, as Matthew 2:1-2 reports that magi, “astrologer-priests”, had deduced the birth of baby Jesus through “his star at its rising”. Moreover, cuneiform astronomical-astrological texts refer to Orion by the Sumerian title DINGIR DA-MU. And since DA-MU meant “child” or “son” in Sumerian, the name rendered “Son-god”. DINGIR was the Sumerian word for “god” and it also served as a logogram which stood for the Akkadian word sha/“of”. Therefore, polysemous readings encrypted in one of Orion’s titles yielded the words: “Son, Of, God”. These encryptions provide the cuneiform correlate to the evangelists’ Greek epithet for Jesus, “Son of God”/ huios theou . 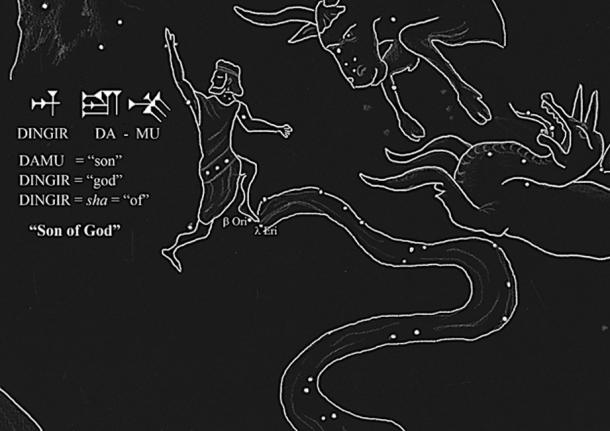 Cuneiform star atlases and ritual tablets also label Orion as a SUKAL, “Messenger”. The same cuneiform sign also served as the logogram for a revered type of priest called the Pashishu, “Anointed-One”—the cuneiform equivalent to the Greek Christos, “Anointed-One”, which we anglicize as Christ. Noteworthy is that the Pashishu-priest, or SUKAL, was believed to possess the ability to subdue the ABZU, the Sumerian term for the celestial waters that embodied the contiguous aquatic constellations that Orion is treading upon. In fact, Gilgamesh encountered Pashishu-priests while traveling through the underworld in table VII of The Gilgamesh Epic . 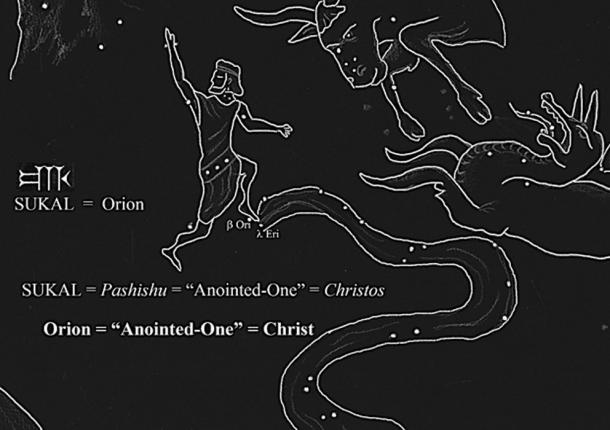 Hence, when the evangelists turned to the starry heavens to discern facts about Jesus’ life, sacred wordplay had divulged that the Sea-Walker constellation, Orion, also engendered the titles “Son of God” and “Christ”. This heavenly revelation evidently compelled Matthew, Mark, and John to equate Orion with Jesus and attribute the former’s “sea-walking” ability to the latter.

In Part II, How Punning Resolves the Irreconcilable Details of Jesus’ Sea-Walk , we’ll decipher the stellar tableau and enciphered puns that imparted the thematic similarities in Jesus’ “Sea-Walk” miracle. We will then expose the divine celestial communiqués that divulged the narratives’ jolting discrepancies. Namely, how Peter came to walk on water alongside Christ, why Jesus “wanted to go by” the disciples ship during the sea-walk, and how the apostles, their boat, and Jesus had instantly teleported three or four miles to the other side of the lake.